Educator of the youth

St. Montfort was born on 31stJanuary 1673 in a small town called Montfort. From his early age, he was devoted to Blessed Virgin Mary and later, this devotion to the Mother of Lord Jesus was an integral part of his spiritual life. At the age of eleven he went to Rennes to study in a Jesuit Institution. After 8 years of study, he left for Paris to study at St.Sulpice seminary to become a priest. On his way, he crossed a bridge called‘ ”Cesson  “ and took a radical decision never to be attached to any worldly possessions or material good sand to live a life of total dependence on God. He gave away everything to the poor and even exchanged his clothes with a beggar. He felt that ‘God alone’ was his Father and Blessed Virgin Mary, his Mother. He was ordained a priest on 5th June 1700. Throughout his life he worked with the poor, orphans, destitute, widows, lepers and the sick. He lived the Gospel radically and challenged the rich who refused to share their wealth with the poor and the needy. He went from parish to parish as avagabond preaching numerous missions and bringing people back to God. 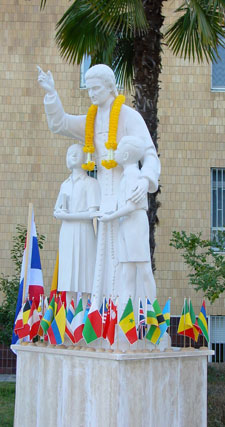 In many places he constructed Calvaries and statues to facilitate people to reflection the mystery of  the cross and salvation. He was a mystic living like Jesus. Yet  he found time to write many books and poems such as-True devotion to Blessed Virgin, Love of Eternal Wisdom, Letter to the Friends of the Cross, The Secret of the Rosary, The Secret of Mary, and many hymns. His love for the cross and his absolute trust in God made him declare “No Cross what a Cross”, which ultimately became his philosophy and watch word. He started schools for the poor youth. Worn out by his apostolate, weakened by his life of poverty and attempts on his life, he collapsed during a mission at Saint Laurent-sur-Sèvre and died on April 28, 1716 at the age of 43. People acclaimed Montfort a Saint. Pope Pius XII canonized Montfort on July 20, 1947.

Three congregations which trace their foundation to St. Louis de Montfort are : Daughters of Wisdom, Company of Mary and Brothers of St. Gabriel. They continue the work and mission of Montfort all over the world. Montfort Brothers of St.Gabriel first came to India in 1903 at Pondicherry. Having taken root, they slowly spread to other parts of the country. At present, Brothers are serving in 5 Continents. Their aim is to be missionaries for the youth, in the footsteps of Montfort and to devote their lives to teaching, catechizing, animation of the youth, paying special attention to the poor, forsaken and differently abled children.